Yvonne Welbon is Senior Creative Consultant at Chicken & Egg Pictures. She is an award-winning filmmaker and founder of the Chicago-based non-profit Sisters in Cinema. She has produced and distributed over 20 films including Living With Pride: Ruth Ellis @100, winner of ten best documentary awards and Sisters in Cinema, a documentary on the history of black women feature film directors. Her work has been broadcast on PBS, Starz/Encore, TV-ONE, IFC, Bravo, the Sundance Channel, BET, HBO, Netflix, iTunes and screened in over one hundred film festivals around the world. Her current projects include her a trans-media production which includes a book, website and documentary called Sisters in the Life: A History of Out African American Lesbian Media-Making (Duke University Press), The Spies Who Loved Me which focuses on the six-years she lived in Taiwan and The Roadwork Oral History and Documentary Project which focuses on a multi-racial women’s cultural movement. She has taught at University of Chicago, Northwestern University and chaired the Journalism & Media Studies Department at Bennett College. Raised in an Afro-Latinx Honduran household on the South side of Chicago, Welbon received a B.A from Vassar College, a MFA from the School of the Art Institute of Chicago, a Ph.D. from Northwestern University, and is a graduate of the American Film Institute’s Directing Workshop for Women. 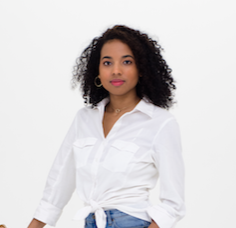 Born and raised in Chicago, Illinois, Lia Miller is a creative producer and writer. Lia received her Bachelor of Arts Degree in Cinema Arts and Sciences at Columbia College Chicago in 2016. She specializes in content creation, production management, script writing, and marketing/pr.

Lia has freelance on numerous media projects under her belt since graduation. Some of the notable companies she has worked with are the Hyde Park Art Center, Allied Integrated Marketing, Wright Bros. Photoplay, and Sisters in Cinema. She loves to participate in projects that are extremely inclusive and diverse. She hopes to use her art to promote cultural relativity in the world.